Paul Kurtz - We Got Your Wiki Back!

My mantra for today.  Wikipedia editors believe to keep the project civil we should always assume that the other editors (some from the opposite side of the fence) are also working to create the best encyclopedia possible.

This is why when I started looking further into some edits made in the last couple days on the page for Paul Kurtz I started to get a bit upset.

As you all know by now, one of the founders of the modern skeptical movement died on Saturday, Oct. 20.  I've met Dr. Kurtz several times, once for a week summer session at CFI in Buffalo.  He was one of our instructors on Naturalism.  I'm almost embarrassed to say that I had no idea what he was talking about most of the time.  I am just one of those people who can not grasp philosophy, I'm sorry if that shatters your illusions of me as an intellectual, but that's just the way it is.

Another time was at TAM8, where one of my photo goals was to try and get a image of Kurtz and Randi together. I thought it might be difficult as they had been at odds with each other for years.  I found getting the image to be really easy as they were together often. 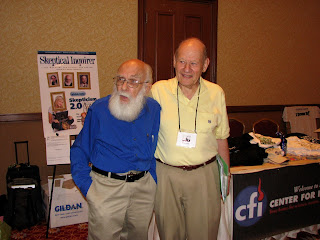 So when I learned about Paul Kurtz's death yesterday I went over to his Wikipedia page to make sure there was no vandalism, and to make sure it was in great shape so that when the media started to access the page to find out more about this amazing man, they would find something worth looking at.  In the back of my mind I was worried about someone with a agenda saying that he had converted to XYZ religion on his deathbed, then the media picking up on that and the next thing you know it is on the front page of some newspaper.

First thing I noticed was that two people had spent a couple hours taking up a big chunk of the page to showcase his last project, The Institute for Secular Human Values.  Personally I don't think that an organization that has only existed for 2 years should get more prominence on the page than CSICOP which has been around for 30+ years.

The second thing that concerned me was this sentence.  "Upon being forced out of the Center for Inquiry, by the board and management for power and control of the vast network and holdings he had envisioned, developed, managed and maintained for decades, he launched the Institute for Science and Human Values as a separate entity."

That definitely can not remain,  there is no citation to prove this statement, so it sounds just like opinion.

Lei just removed another major addition to the page.  Someone added in over 2,000 characters of content, trying to prove that Kurtz was opposed to militant atheists.  While this might be true (I don't know) an edit this big and controversial needs to be discussed on the Talk page first.  And added in only after a discussion of why it is necessary and should take up a good sized chunk of the page.

At this moment I'm not that interested in knowing who these people are, I'm sure it would be easy to figure it out if someone wanted to, but I'm busy with other pages waiting to be looked after.  I'm only curious why they thought that these kinds of edits would pass unnoticed?  Do they not understand that the page might have a hundred editors watching the page?

I'm more interested in drawing attention to the fact that we need to make sure that our skeptical spokespersons pages are always in great shape. We need to keep a good eye on this page the next few days and keep the discussion on the talk page going.

Professor Paul Kurtz deserves better.  Not only because he was one of our founders, but because he represents us, and we him.  Now before the media starts getting the wrong impression, lets get this page in shape.

Extra credit points for the first person who sends me a news story that obviously copied the WP article.
Posted by sgerbic at 5:11 PM