So what do all these have in common?  They have a new face on Wikipedia.

Not sure how this slipped off my radar but somehow this page re-write by Lei Pinter from last year never got the attention it deserves.  This was a lot of work, records on Vashti McCollum (the person) from notable sources were difficult to come by.   She tried to get a photo released by the family but couldn't make that happen. Possibly one of the GSoW readers might be able to help us out?

Anyway, Lei tells a terrific story of a woman who faces off with the government over religious instruction in her son's school in the mid-1940's in Illinois.  We skeptics should be ashamed at the condition Lei found the page in before she started working on it.  Is this how we treat our representatives?  If we don't show them respect, why should we expect people outside our community to show them respect?  Thanks to Lei and the GSoW team, we now have McCollum's Wiki Back.

This page was in very sorry shape when Vera de Kok first took it on as you can see here. Brian Engler uploaded an image he took at TAM 2012.  Then Nathan Miller finished it up with a total re-write.  Much improved, great teamwork all.  Current Page

The Igwe release hit the front page of Wikipedia as a Did You Know in Feburary.  For regular followers of this blog you know that getting the front page for 8 hours is a big deal.  An extra effort is required to make it happen, and only brand new pages (no more than 5 days) or newly expanded pages within 5 days of its re-release are given that honor.  When I say expanded, I mean really expanded.  When you look at the before and after of Igwe's page you will see what I mean.  Only well-written and scrutinized articles are allowed.

That number is only a part of the story.  Igwe's article discusses other human rights groups doing similar work.  During the DYK for Igwe's article, the pages for Stepping Stones Nigeria received a 1,652%  daily increase.  That's a measurable effect to show how well we are raising awareness. The article on Witch Children in Africa, which receives virtually no traffic, received 4,339 visitors during that day.

Skeptical organizations receive extra attention from these Did You Know?  features as well. The Center For Inquiry article's daily traffic spiked by 33%, and daily visits to the James Randi Educational Foundation article grew by 20%.

Military Association of Atheists and Freethinkers

Frederick Green along with some help from the team took on the rewrite of the Military Association of Atheists and Freethinkers page.  Here is the before  and now the after.

Because we expanded the article enough we were able to ask for a DYK, which appeared on the front page of Wikipedia on March 10, 2013.  Stats show a spike of 2,565 views.

The hook we used was this one... DYK ... that the Military Association of Atheists & Freethinkers provides "atheists in foxholes" with advocacy, community and education?

The atheists in foxhole page received 1709 views when normally it receives about 250 each day.

Everyone seemed surprised that Don Prothero did not already have a Wikipedia page, and once I started reading through Lei Pinter's drafts I can see why.  This man was long ago deserving a page.
We secured a Did You Know for Prothero also.  In the wee hours of the morning for America this appeared on the front page of Wikipedia.  DYK... that Stephen Jay Gould once called Donald Prothero "the best punctuated equilibrium researcher on the West Coast"?"

No, I didn't rewrite Bill Maher's Wikipedia page.  This is a example of working backwards, and guerrilla skepticism on Wikipedia.  I finally got around to watching Jamy Ian Swiss's lecture from TAM 2012.  In this video he talks about what scientific skepticism is.  I thought it was a good definition and would improve readers understanding of the term.  So I went to the scientific skepticism Wikipedia page and left a quote and citation to the video.  That one edit will expose the Swiss video (and the Swiss WP page) to 100K readers each year.  (note: the Swiss video on the JREF channel currently has 7,687 views.  If someone wanted to check back periodically, they could tell if there is a noticeable increase in views from today)

But this does not explain why I'm talking about Bill Maher.   In his video, Swiss goes on a awesome rant and calls Maher (an)  "anti-science, anti-vaxer, dangerous ignoramus, promoting toxic anti-scientific nonsense that kills people!"  That quote is just too good to waste.  So I ventured over to Maher's WP page and saw that the majority of the page is positive.  A man this popular and controversial needs a criticism section.  But this isn't a simple edit that just any editor of WP is going to be able to place without some problems.  So I made my intentions known on the Maher talk page, then went to my GSoW team and asked for more critical (and scholarly) citations from notable people.

I got several suggestions and started to compile a list.  One of these citations wouldn't be enough alone, but several all together shows that there is a concurrence within the scientific skepticism community that Maher's anti-vax propaganda is dangerous.  So I added a criticism section to the Maher page.  Here is the page as I left it that night.

It took a few hours before other editors (not on the GSoW team) toned down my edit.  Swiss is quite aggressively verbal, as are others like Gardner who said, he (Gardner) was happy that Maher did not have children of his own that he could kill.  The rules dealing with living persons on Wikipedia are written so someone can't quote mine and attack.  The editors were quite right that the page is improved as it exists today.  They also changed my edit from anti-vax to anti-vaccination (which one of the GSoW editors also suggested) to make it clearer to readers.

Also in the lede, before I got a hold of the page, the part in the second paragraph said... "He is also a critic of religion and is an advisory board member of Project Reason, a foundation to promote scientific knowledge and secular values within society."  I thought that was too wordy, and that the editor who wrote this was trying to infer that Maher was very sciency.  So I took off everything after the words "Project Reason."

The reason why I say this was working backwards, is because I was starting with a good citation from a notable person/place and then I took a look around WP and found a place to leave it.  Just the opposite of what most editors do.  Trust me this is much simpler to do this way.

This is guerrilla skepticism,  it is getting our skeptical message into areas that it wasn't before.  In ways that are non-traditional and mole-like.

So to review, Maher's page now has citations for the SGU podcast, the JREF Swiss video and David Gorski's blog on ScienceBlog.  There are hyperlinks to many of our resources that were not there before, Steven Novella, Jamy Ian Swiss, Paul Offit, David Gorski, ScienceBlogs and Martin Gardner.   In the footnotes, beside each citation I have hyperlinked to the SGU, CSICOP and JREF.

Time will tell if these edits I left will have any influence on changing minds.  It is too early to tell if people will click on the hyperlinks and discover our spokespeople and organizations.  I'm sure most people don't read through an entire Wikipedia page, they look for what they need and move on.

But we have to try.  If I had just shared the Swiss video on my Facebook or Twitter timeline, it would have only reached about 2K people, and maybe only 20 people would click on the link and watch the video.  Then my "update" would move on and no one would notice it again.

Leaving these edits, will expose people who are not necessarily in the skeptic community to the video/podcast/blog.  And not just for some arbitrary moment on a Facebook feed.  But every day, every month, every year (as long as they aren't removed).  And how many potential views are we talking about?  I'll leave you to play with this graph, but at the time of this writing the Maher page is receiving about 100K views each month.  Over a million views each year.  Quite a sizable difference from the 20 +/- views it would have received on my Facebook feed.

I wonder if Maher had been following the changes to his Wikipedia page?  He came out with this while I was writing this blog.  Religion, it's like Wikipedia.

Now, I hope I've whet your appetite.  This is powerful stuff.  We need your help, there are thousands of edits just waiting to be added into Wikipedia, maybe even hundreds of thousands of edits.  And hundreds of pages that need to be created or rewritten.  We need people who are good at proof-reading, and people who can improve the basic edits we leave.  Researchers, current editors, people willing to caption videos and so much more.  And it needs to happen in English and other languages.  We aren't looking for a handout, we don't want your money.  We want your time, we want your attention.  We train, we mentor,  please join this most powerful and important project.

Write to me at susangerbic@yahoo.com if you have questions.  Or friend me on Facebook or twitter.  We are all busy people, my work-load would make your head spin, but this is important, what are you waiting for? Join us.

How to categorize people on Wikimedia Commons

Hi, I'm Vera and I've been helping Susan and the rest of the group out in getting around on Wikimedia Commons, the media database the Wikipedia projects relies upon. I've written here before about how to transfer files from Flickr, and how the OTRS system works, today I'm going to tackle categories. I thought this was a good idea since Susan requested everyone to send in portraits last week.

Just like Wikipedia, files and pages on Commons are categorized, but unlike articles where categories are often an after though, they form the back bone of this project. This because there is no text that can link to other articles, so you often have to rely on the categories to find what you are looking for.

Please note: categories aren't tags. When you've added a file to say “Atheists from the United States”, there is no need to also ad “Atheism” or “Atheist”. The trick is to add the lowest level category as possible. Categories have a structure, for example: 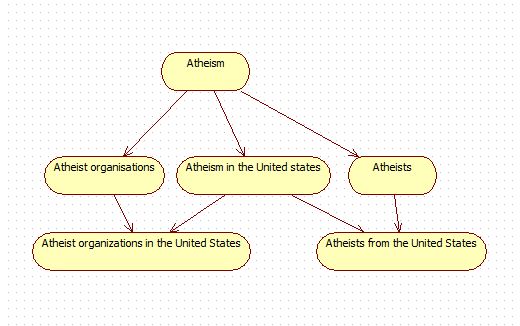 Like this there is a huge tree structure on Wikimedia Commons, making all people in the end categorized in a subcategory of Homo Sapiens, even Kent Hovind.