Its been brought to my attention that the last post here on the blog was in January of 2017. That's entirely correct. Normally this is a sign of a dying group, that nothing is being done and there is nothing to report. I assure you that the opposite is true. GSoW has been so busy that reporting everything that is happening on this blog is just too much to keep up with. So I'm going to attempt to catch people up now.


The last blog post I posted that Stat Badger (see the blog before this one to explain) had hit an amazing number.

Eight million page views at that time was just surreal. How many other volunteer projects can say that? These were numbers from Wikipedia pages in all kinds of languages. So lets start off with where we are today. September 3rd, 2017

This is a 67% increase in 7 months. We have added quite a few pages to Stat Badger in that time. We add about 15K page views a day, insane isn't that.  We have also seen a large spike in an unexpected place. The Stan Romanek Wikipedia page was written in early 2012 by GSoW. The page was a very very low viewed page with 75 page views a day. Then one day in July it hit over 42K. That was just one day. Since its creation in 2012 the page has been viewed 609,247 times. 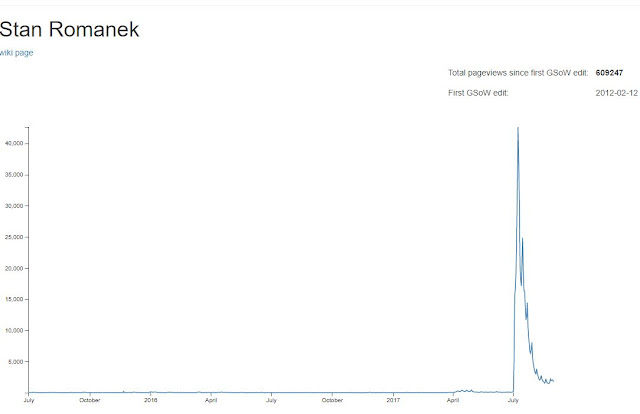 Why you might ask, and who is Stan Romanek and why is this important? Great questions Thanks for asking.

Stan Romanek is a Denver, Colorado man who claims that he has been abducted by aliens, has a alien implant and is in the Colorado media from time to time. He even tried to get the city to build a UFO landing strip. What happened in July 2017 is that Netflix made a movie about him. In August he was found guilty of felony possession and distribution of child porn, (he claims that someone put them on his computer) Anyway, the reason why this is important is that GSoW was ahead of the game many years before he received an enormous amount of coverage outside of Denver. When the Netflix documentary was released, then people who wanted to know more had a way of finding out more. I haven't seen the Netflix doc, but I expect that it probably leaned favorably towards Romanek. The Wikipedia page correctly reflects an unbiased view of Romanek, the only sources are to notable citations.

Another high ranking page Cryotherapy got a rewrite from editor Harald Berents. Before he rewrote it, the page had almost no criticism and was an endorsement for cryotherapy. Now it is properly sourced. Since he rewrote the page July 8, 2017 it has brought in 52,850 page views.

Netflix brought fame to another Wikipedia page, What the Health. A GSoW fan on Facebook brought this to our attention. The documentary was released in March 2017, it criticizes dairy and meat diets, and supports only veganism. At the time we were made aware of this Wikipedia page, there was no criticism of the claims being made on the page. And very little notable criticism existed on the Internet at all. I asked Science Based Medicine blogger Harriet Hall to please research the documentary and write something up. She did, telling me that "I owe her 2 hours of her life back". GSoW editor Rob Palmer and others spent weeks keeping the notable criticism on the page, Since we took on this the page has been viewed 263,680 times. 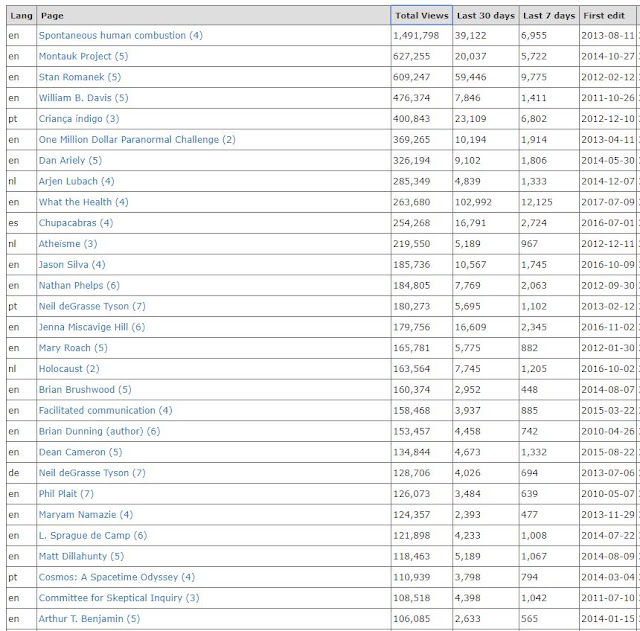 Another major achievement was for GSoW editor Adam Kumiszcza to finish GSoW training, then he went wild. He is our only Polish editor and when he heard that the European Skeptics Congress would be held in Wroclaw, Poland this September, he started translating and creating new pages in English and Polish. He is responsible for 26 pages all released in 2017. In total these pages have brought in 36,646 page views. 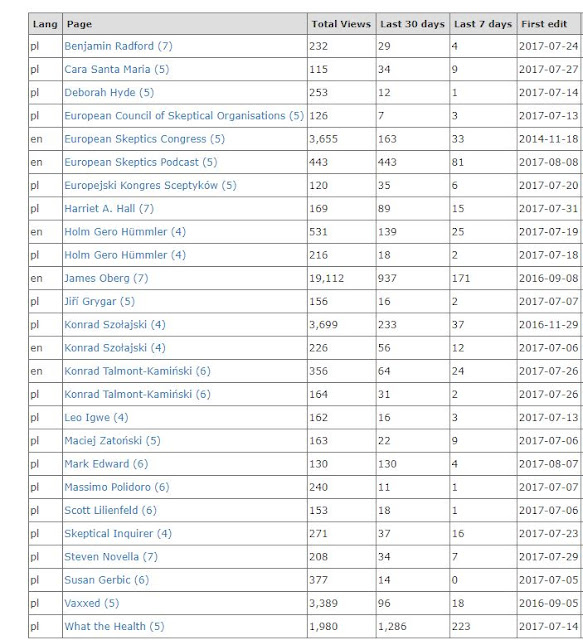 Personally, I am kept really busy. I've done several interviews on podcasts as well has lots of traveling to speak about GSoW. San Jose area, Syracuse NY, Washington DC and will be doing a tour of Europe in a couple weeks (OMG is it only 11 days till I fly out... AHHHH)

Here is the funding page and the list for all the places I (and the others that are touring with me) will be speaking at.

Also I've been writing for Skeptical Inquirer's Special Articles. Most of these articles/interviews are then used as citations on existing Wikipedia pages. Here is a link to all the articles I've written for them.

And I have been keeping on Grief Vampire Tyler Henry. I think I'm up to 7 articles about him already. I have one waiting to be published about a reading he did predicting Alan Thicke's death. Hopefully I will be able to continue writing about Tyler, as long as he is still around.

Many of GSoW will be at the upcoming conferences, Australia, QED and CSICon. I'm speaking on the main stage on Friday afternoon at CSICon. This is happening in Vegas the weekend before Halloween. I'm a giant advocate for conference attendance, please please please try and attend something this year. You can thank me later.

Thank you all for your support!