The year seems to be starting off right.  GSoW has launched a new group focus, this time it is all things concerning vaccines. We have decided to focus on this topic because of the recent alarming outbreaks of vaccine-preventable diseases in areas where immunisation rates have dropped. And because we have already done the pages for many of the skeptical spokespeople who are publicly supporting vaccines (David Gorski, Harriet Hall, Steven Novella and more) we are going to focus on the anti-vaxers.

The only one that was finished in time for this blog update was for the anti-vax lecturer Sherri Tenpenny.  This Ohio woman was planning a Australian tour encouraging parents not to vaccinate their children.  The Australian skeptic community was able to organize and get her tour cancelled. You can read all about it on her Wikipedia page. These pages aren't going to be the beautiful pages you have grown used to reading about here on this blog, with photos and interesting facts about their lives.  These pages are designed to just get the facts and citations out there, just the bare bones.  We aren't going to be hunting these people down and asking them to upload a nice profile photo or audio.
This is the before and after for Sherri Tenpenny.  The work on this page was completed by Susan Gerbic and two non-GSoW skeptics, Joe Alabaster and Phil Kent.

The next big news is that the Australian Skeptic's National Convention have asked me (Susan) to travel to Brisbane to speak in their conference. I'm so thrilled, I had no idea I was even being considered.  I hope to be going on a skeptic lecture tour (hopefully hitting all the places that Tenpenny had to vacate) 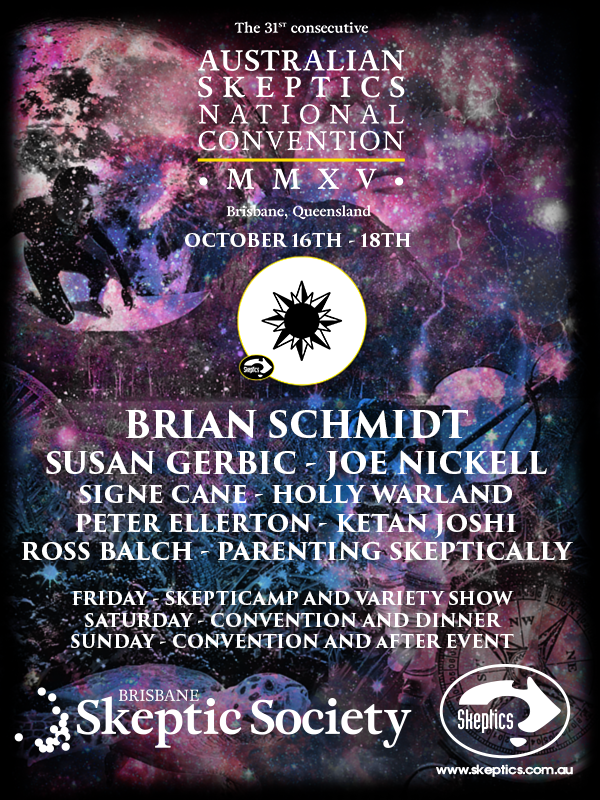 Christine Daley and Leon Korteweg improved and expanded the List of prizes for evidence of the paranormal, this is essential for the international skeptical movement: prove us that there is something paranormal, magical, supernatural or whatever extraordinary under controlled conditions, and skeptics will be amazed and pay you well. Curiously, however, nobody has even passed any of the tests, and not for a lack of trying, nor because they were unfair – conditions are always mutually agreed upon between challengers and claimants. Before & After

Leon Korteweg has given the Atheist Manifesto by Dutch philosopher Herman Philipse an English Wikipedia page (reviewed by Michelle Franklin). Although Philipse said he was frustrated everyone in the Netherlands only knew him from 'that odd manifesto', branded 'superficial' by opponents, this booklet was enough for Ayaan Hirsi Ali to reject Islam definitively, after which she became the world's most vocal female critic of religion. She wrote the preface to the 2004 republication.

On 18 February, Rob Nanninga was featured as on the Main Page as Did You Know, attracting an amazing 11,500 views that day, another 5,000 the next day and 7,500 more the third day! Leon Korteweg, who had previously written his Dutch article in September, and improved it before publishing the English translation (with the help of Susan Gerbic, Julie Tomlinson, Janyce Boynton, Michelle Franklin and Jan Willem Nienhuys who all reviewed it) on 30 January, was overwhelmed at the success. 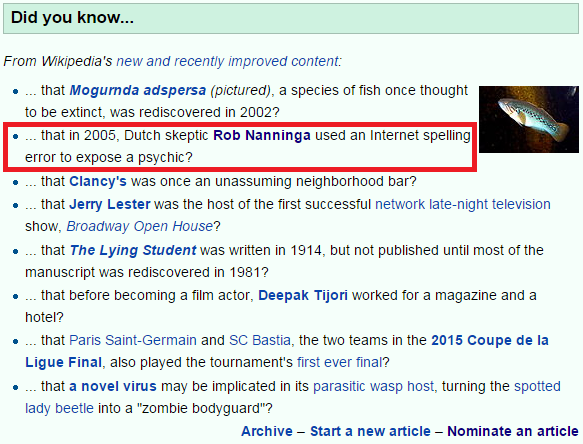 Warrick Couch - by editor Greg Neilson was a brand new creation. Greg told me that he was shocked that this man didn't already have a Wikipedia page. Once I read Greg's draft I had to agree, this man has done just about everything but "Dancing with the Stars".  I think that might be a reality show that I would watch, can you imagine a bunch of astronomers dancing together?  I think that would be a great theme for a astronomy conference.

Greg applied for the Did You Know and within a few days it was on the front page. It even bypassed the normal waiting period. We aren't complaining, DYK's get the page views outside the normal skeptic choir. 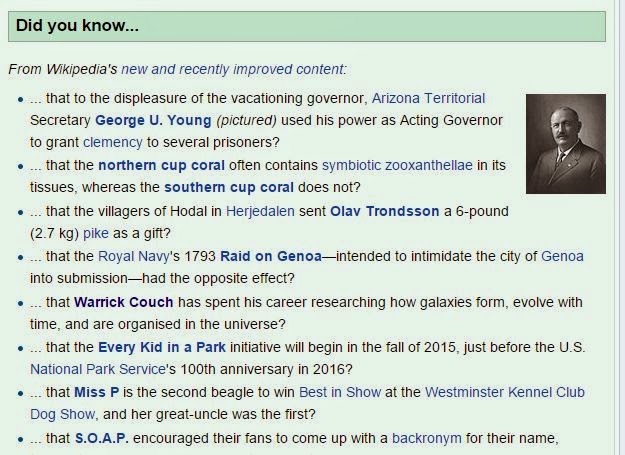 Warrick Couch hit 1,999 views during its first 3 days Did You Know window.

Perry DeAngelis, who most people will know as a former host of The Skeptics' Guide to the Universe podcast of the New England Skeptical Society (see below) before his death in 2007, was in fact the driving force behind the foundation of both. Susan Gerbic and Jim Preston created a page to acknowledge his importance.

The New England Skeptic Society (NESS) was given a major rewrite by Susan Gerbic, who delved into its history (among them Perry DeAngelis' part, see above), achievements and activities. It now has a worthy article - Before & After

Jelena Levin wrote a new page for Recovering from Religion, an international organisation that provides help to people who struggle with losing their faith. Recently a hotline was launched for anyone facing immediate troubles, while RR does not preach or proselytise, only provide aid where it can. Leon Korteweg reviewed and corrected the article.

The stub for Mark Forsyth was massively expanded by Janyce Boynton. Before & After

On 11 February, Janyce Boynton's page about American folklorist Jan Harold Brunvand featured as a Did You Know on English Wikipedia's Main Page. It received over a 1,000 views that day. 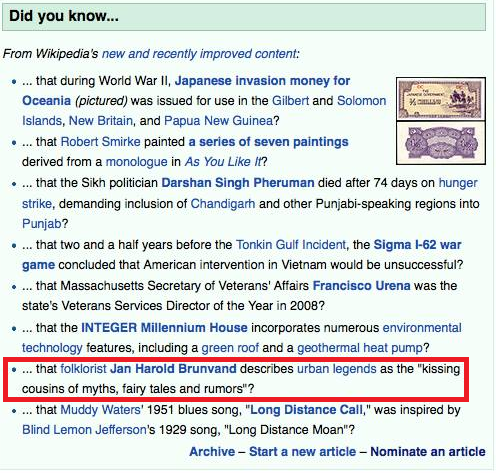 The Dutch team has continued translating biographies of Dutch-speaking skeptical activists to English. As reported in early January, we have published the English pages of Flemish philosopher Maarten Boudry (SKEPP, Het Denkgelag) and Dutch physician Catherine de Jong (VtdK), both actively involved in the movement.
Now Leon Korteweg has translated the articles for Jan Willem Nienhuys (reviewed by Ryan Harding, Susan Gerbic and Nienhuys himself) as the public face of Stichting Skepsis, and the late Rob Nanninga (reviewed by Michelle Franklin, Susan Gerbic, Janyce Boynton and Jan Willem Nienhuys), who was the driving force behind Stichting Skepsis as editor of Skepter magazine until his death.

Leon Korteweg also translated the English entry he wrote for Skeptics with a K, which was reviewed by Wim Vandenberghe and Coen de Bruijn.


After visiting Het Denkgelag in Antwerp on 26 January together with Jozef, Coen, Emile and others who are allies of GSoW, Leon worked together with them and several Flemish skeptics including Pieter Brauwers, Pieter Van Nuffel, Dries Van Giel and Maarten Boudry to write an article for this young conference that tries to reach people beyond the skeptical choir. We also got an amazing opportunity to interview Julia Galef for a future page about her, as well as meeting Maarten Boudry whose page we had been expanding in Dutch and translate to English for several weeks, for which he kindly thanked us. Vera de Kok aided in the layout of pictures across the page.

The improved and expanded the List of prizes for evidence of the paranormal (see above) has been translated into Dutch by Leon Korteweg and Wim Vandenberghe.

Lanyrd is increasingly used for planning, documenting and coverage of skeptical events, ranging from multi-day conferences to smaller gatherings such as Skeptics in the Pub. Leon Korteweg and Emile Dingemans thought it was time to make Lanyrd known among the Dutch-speaking public by giving them a Wikipedia page in Dutch.

Monica Quijano rewrote the Spanish page about Chupacabras, the cryptids that are often ascribed mysterious disappearances or deaths of animals in the Americas, but for whose existence there has never been found any conclusive reliable evidence, despite wide popular belief. The page was riddled with unsourced claims or poor citations (16 in total), now it has 53 solid references, providing much more accurate information on the subject. The article was reviewed by Walkiria Nubes and Erik Hess. Before & After

In a special article for the Committee for Skeptical Inquiry, 'Burzynski Clinic: A Scientifical Year Of Fail', Sharon Hill credits GSoW –among others– for providing 'extensive information and citations of [Burzynski's] failure to produce evidence, his failure to follow regulations, and the consensus that scientists and cancer organizations have discredited the doctor and his treatments' on Wikipedia (in several languages).


In line with the GSoW Vax project, we will now concentrate on providing more accurate and reliable information about vaccination and the anti-vaxx movement. Susan interviewed Leon about his own story with vaccination and the situation in the Netherlands (an abridged version featured on Skepticality #248 @11:10).